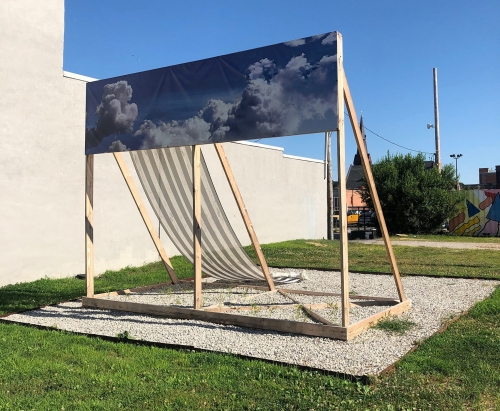 A foundational vision of The Luminary is to support art that is not just a voice of our time, but a means of building new futures. We support artists operating at the forefront of social change, advocating for art that makes its way out of the gallery and into the city. With Counterpublic, we exit the gallery to enter almost two dozen neighboring spaces in order to communally rehearse what an equitable, interconnected, and expansive community could look like. To paraphrase Michael Warner’s foundational proposition in the text that gives the project its name: Counterpublics are oriented towards the future.

Though designed to roam through St. Louis and further afield in future iterations, Counterpublic 2019 takes place in a confluence of communities colloquially known as Cherokee Street. It is a convergence of four of the most socio-economically and racially layered neighborhoods in St. Louis – already a charged city for any notion of publicness and occupation of public space. It is the primary Latinx district in the city, has become a contentious site of development and displacement, and both in its name and its adjacencies to significant former Indigenous sites directly engages (and obscures) the Indigenous histories of the region. In this, it is forever multiple, eluding easy definition. It contains contradiction, even conflict, and in this unflattened space has the potential to point to ways of better living together as we learn ourselves – in public.

Counterpublic 2019 attempts to expand spaces of dissent, dialogue, care, and complexity within this immediate community through responsive commissions and intentional intersections with this space. Projects engage land use and neighborhood change, monument-making for marginalized communities, choreographies of resistance, and the decolonization of public space. Projects from thirty-plus artists and collaboratives will occupy both temporary and permanent sites within a dense twelve block radius ranging from communal structures of rest to singular sound commissions; fictional institutions and film installations; and performances through the streets, in storefronts, and on rooftops.

Programs throughout its three-month run will range from youth-led publications to tenant organizing; direct forums with elected representatives and research-based residencies to parades that resist sound ordinances and over-policing. Counterpublic has a taste, through galletas, ‘occassions’ and conceptual drinks. A sound of shaking resonant in its structure through subwoofers and sirens. A shape in the snaking processions through the streets, and a presence both present and lingering.

In its expansive experiments Counterpublic aims to advance towards counter-futures, seeing in the complexities and collectivities of this already-existing place a future public possible. In this, it aims to exist within this counter-future for its duration in order to enable us to taste, touch, and live within this altered frame, this coming community.

St. Louis is a city that has become synonymous with radical rupture, a seedbed for reactionary policies and polities as well as prefigurative publics. It is the home of one of the central uprisings in recent history and a spark of the Black Lives Matter Movement, but it is also a place whose disparities made this uprising necessary. It is a dissonance of parts and people (as recently deceased would-be novel laureate of the city William Gass proclaimed) that cannot be contained or summed up. Counterpublic poses complex publics capable of containing contradiction, opposition, and imagination together in dynamic relation. If the horizon of violence in nationalism is a primary harbinger in ascent seemingly everywhere, then perhaps the potenzia of the counterpublic is its counterpoint. We start from a place and let it lead us elsewhere.

In the hyper-local attention Counterpublic pays to a place, we aim to see a more nuanced collective appearing, not in the exclusionary narratives of nationalism, or fleeting boosterism of the typical triennial, but in the dissonance, nuance and collectivity of the community as it is – the parts and people actually occupying a place, making lives there, framing out localized policies within and against politics arrived from elsewhere, and having to negotiate uncertainty, difference, and discontent towards the forever contradictory togetherness we call community.

How do we account for the publics of the punk club and panaderia, the barbershop and Buddhist temple, along with the political campaigns, town halls, basketball courts, buskers, blue lines on flags and bricks through windows, Facetime exchanges, festival parades, and futbol games? Who constitutes a public, where do they cohere, and for how long? Can a public be the space of a livestream, or the passing in a club? What shape is a public? Is the public a sphere, or a square? Where does it appear: on a street, on a phone, in a procession, at a protest?

As Alexander Kluge notes in his writing on counterpublics, “the real social experiences of human beings, produced in everyday life and work, cut across such divisions.” We posit that the counterpublics within a community are more expansive even than those of a nation, as if the smaller a public is the more complexity it can contain. Perhaps as we conscript the “public” into ever larger formations, the borders around these definitions become more forceful. The polyvocal publics within a place–every place–elude easy endnotes. These multiple, municipalist publics host the everyday appearance of politics. It is an argument we tend to carefully.

These counterpublics organize independently of a curatorial gesture or artistic platform, outside of formal frameworks of citizenship or preexisting institutions. We seed a future – and wait. They will appear when no one is left looking. Our curatorial intention is a durational attention to the publics to come: to the publics that we are and those that we are not yet.

Read more about Counterpublic from The Luminary
Back To Top