Callicoon Fine Arts is very pleased to present I won’t wait for grey hairs and worldly cares to soften my views, the first exhibition in the United States by Dubai-based artists Ramin Haerizadeh, Rokni Haerizadeh, and Hesam Rahmanian. The three have become known for their satirical approach to contemporary politics, building up immersive environments that blur the lines between their individual artistic practices, even while maintaining their own distinct identities. The elasticity of these categories is furthered with the inclusion of works by other artists in the exhibition. Be it from the Iran of their origin, or from aspects of American and European culture and art history, the artists gather allusions in a playful and subversive activity.

Over the course of a multi-week installation the artists transform the gallery into an extension of their shared home and the work spaces of their studios. The accumulation places equal emphasis on their diverse sources. The extraordinary Zanni trickster of Commedia dell’arte, for example, or the friends and acquaintances that contribute to their daily life, all become a point of contact from which the trio develop their ongoing process. As “exhibition-cum-theatre,” the show includes video (in both performance and animation-based forms), painting, sculpture and collage, with the walls and floor of the space covered in painting. Networks of loose geometry, blooms of amaryllis, and illustrated figures in a style that references traditional forms of Iranian painting and calligraphy extend throughout the gallery.

In an adaptation of Genet’s The Maids, a slide show of images documents the artists’ own performance of the play. Set in the baroque stage of the trio’s Dubai home, they enact a campy version of the sadomasochistic scenes and incorporate a tableau that references David’s The Death of Socrates. Also included in the exhibition is a sculptural assemblage with a water fountain at its base and a tumbling array of mannequin limbs, a pink rimmed jug and artificial flowers. In another work, a draped canvas depicts a partially obscured wedding procession, royals from a Madame Tussaud display, over which is placed a handmade bowl and tennis racket altered with a stocking and clay. The quotidian is heightened by ritual, only to be brought back down to earth.

The Haerizadeh brothers met Rahmanian in Tehran over their shared interest in bootlegged MTV and VIVA Polska VHS tapes. Years later, due to artistic censorship in Iran, the artists began living together in Dubai. Since 2009 they have worked to generate a near around-the-clock research based dialogue. Each artist, operating from their own unique set of aesthetics, share the use of wit and satire to recast ideas regarding power and activism, identity and desire. While instigating critique, the surrealist atmosphere of their exhibitions place experience and sensation at the core of their production.

This December, Rahmanian and the Haerizadeh brothers will exhibit at the Institute of Contemporary Art/Boston. Currently Kunsthalle Zürich is hosting an exhibition open till May 17 and recently, a monograph titled Ramin Haerizadeh, Rokni Haerizadeh, Hesam Rahmanian, with an essay by Tina Kukielski, was released by Mousse Publishing. The artists will also participate in the upcoming 8th Asia Pacific Triennial of Contemporary Art, Brisbane. They have staged two collaborative exhibitions at Gallery Isabelle van den Eynde, Dubai (2012, 2014), in addition to their solo exhibitions there. In 2014, the three artists were Robert Rauschenberg Foundation residents in Captiva, Florida.

Ramin Haerizadeh (b. Tehran, 1975) lives and works in Dubai. He has exhibited internationally, notably in Unveiled: New Art from the Middle East, Saatchi Gallery, London (2009); Sharjah Biennial 10 (2011); and The Trees Set Forth to Seek for a King at the Museum on the Seam, Jerusalem (2014). He has had three solo exhibitions at Gallery Isabelle van den Eynde, Dubai, and a solo exhibition at Gallery Nathalie Obadia, Paris, in 2012. His works are held in a number of collections including Guggenheim Abu Dhabi, the British Museum, the Devi Art Foundation and the Rubell Family Collection.

Rokni Haerizadeh (b. Tehran, 1978) lives and works in Dubai. He has participated in numerous institutional exhibitions, notably the Carnegie International (2013); Here And Elsewhere at the New Museum, New York (2014); and the Sharjah Biennial (2011). His works are held in public and private collections, including the Carnegie Museum of Art, the British Museum, Tate Modern, the Devi Art Foundation, the JP Morgan Chase Art Collection, and the Rubell Family Collection.

Hesam Rahmanian (b. Knoxville, 1980) lives and works in Dubai. Rahmanian has had solo exhibitions at Gallery Isabelle van den Eynde, Dubai (2013); Paradise Row, London (2011); and Traffic, Dubai (2010). He participated in a group show at the Royal College of Art, London, as one of eight finalists for the MOP CAP 2011 prize. 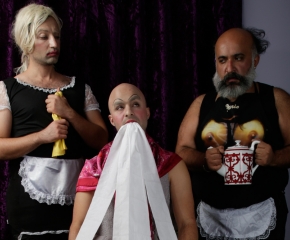