The performance Time Trap is from a body of scripted performance work titled Applied Flesh which proposes a telescoping set of rules and prescriptions that are subject to selective implementation.

Flesh comprises red meat (muscle), fat tissue, and the circulatory system (veins, arteries and capillaries) and is packaged by the skin - all of which attaches to an audience group's mental skeleton of memory and is sorted by our understanding of human nuance.

As Entertainer you are host to the audience's desire.

Your own desires are secondary, relevant before and after the live act.

Entertaining is putting your body in a space confined by an audience’s perspective, for an amount of time limited by social economy.

Confined space, as visual background, is an accomplice to entertainment: a spectator’s mind cannot ignore architecture for its immersivness

How the Body uses space determines its effective time to an audience.

While you cater to your body, the audience’s focus will flutter between physical space, your flesh and interior thought processes. It is not economical to waste time when you have X amount of attentions directed at you. Waste space temporarily, you can always clean up later.

Time is negotiated in three phases: Now, Historical Time, and Deep Time. In Applied Flesh, Now is categorized as the present moment with perhaps an hour, day, or year on either side of the exact moment. Now is most accessible to us as entertainers and is where all the action happens. We have put a buffer zone around the present to incorporate short-term memory and imminent forecasting, as the near future and recent past are constants on the wagon-wheel-of-time that is THIS EXACT MOMENT. When bodies are put in motion, especially when entertaining, the tension between incoming stimuli, forthcoming consequences, and the ordered cataloging in the memory of the audience creates a gravity well of attention around the body.

This gravity is not stable, and wanes quickly over time. The Now stage in the performance has come to an end. It quits existing as an open equation, closing it to the future and confining it to memory. Historical time is where your brain stores and recalls movements and images; it’s where the entertainer is stored in the minds of the entertained. Here is where bodily casualness in the Now phase pays off: memory forgives goof-ups and mistakes. Awkward pauses seem to shorten; in fact whole hours are catalogued as seconds. The performance and entertainer are flattened to an image-blink and given time, perhaps forgotten. An audience’s remembrance and our own bodily memory, float at the shallow end of Historical Time, which further includes long-term subjective memories, objective cultural histories.

Deep Time is the most abstract of our timetable but easiest to comprehend. Deep Time includes the far past and distant future, and everything in-between. Now is a blip on the timeline and Historical Time is a segment. Deep Time is fabricated of accumulations of events, memories and pretty much everything ever. Deep Time is the least relevant to Applied Flesh, in fact only holding the duty of symbolized mortality in the entertained acts of flesh. We could estimate that 99 % of ‘things,’ everything, will be lost in Deep Time. Now is the only time in which we can perceive either of the other two abstract phases. All this talk of time! There’s a lot of it, but it’s valuable. 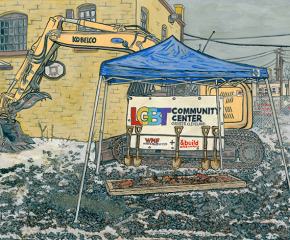 Nicholas Buffon
Back To Top