For his exhibition at Callicoon Fine Arts, James Hoff presents artworks that draw on the mundane and ordinary in order to cast a different light on the meaning of abstraction in visual art. Objects such as a clock, folding tables, umbrellas and found doodles are the common things that, in Hoff’s hands, index minor histories or underground economies, re-routing our understanding of painting and abstraction.

A diverse yet overlapping set of interests are the starting point for projects represented in the exhibition. One conceptual linchpin can be found in the figure of Russell Arundel, an American businessman who, in addition to founding a micro-nation off the coast of Nova Scotia called the Principality of Outer Baldonia, compiled a catalog of doodles by notable figures, including George Washington and Franklin Delano Roosevelt. Published in 1936 and titled Everybody’s Pixillated, the book pairs reproductions of the doodles with Arundel’s own interpretations of their psychological import.

Hoff’s oil on canvas works are enlargements of scratch pads found in stationary stores where customers have tested multi-colored pens. The elegant white expanse of the prepared canvas is a ground for the quoted abstract marks, readymade but also uniquely expressive, symptomatic of the distracted state from which doodles emerge. In another set of works, Hoff pays homage to Arundel by casting the silhouette of this mid-century maverick into the handles of umbrellas. While the umbrellas themselves have been dipped in paint, the molded component is inspired by a 19th Century advertisement for richly customized handles.

The umbrella prototype finds its cousin in a prototype of a lotto machine that tells time. In this sculpture, the regularity of a clock is conflated with the arbitrary movement of numbered balls bouncing around the inside of the machine, calling up the hour in place of a random number. While the entire lotto system has been criticized as a regressive tax on the poor, other forms of hazy economic distribution are hinted at in Hoff’s painted folding tables. Caterer’s typically inventory and color-code their tables by painting the tables’ undersides. Hoff’s similarly painted artworks are hung on the wall with their legs folded flat, determining the pictorial space with their lines and curves.

Hoff’s abiding interest in distribution, indexing and archiving is born out in Milking the Flat Cow, a book published in an edition of 100 that contains 48 images of everyday household objects that are used in some other way then they were originally intended: a microwave used as a mailbox, a battery as match box, a soda can as soap dish, and so on. The processes of reuse and displacement (or replacement and disuse) serve as metaphor for the exhibition as a whole. In order to open and peruse the book’s contents the balloon attached to the inside cover needs inflating.

In addition to his visual work, James Hoff has recorded several albums and his writing has been published by Ugly Duckling Presse, among other presses. His performative lecture, Inventory Arousal, has been presented at the Centre Pompidou, and The Sorbonne, Paris, as well as at the National Academy, Oslo. Hoff is the editor and co-founder of Primary Information, a non-profit organization devoted to printing artists’ books and artists’ writings. Previous group exhibitions include Black Friday at Printed Matter, New York, I Don’t Know if It Makes Any Sense at IMO, Copenhagen, Indian Ocean at Dispatch Bureau, New York, and Castillo/Corrales: Freeks and Geeks, at Air De Paris. His work is currently in Postscript: Writing After Conceptual Art at the Museum of Contemporary Art Denver. In 2013 Hoff’s work will be featured in a two-person exhibition at the Kunsthall Oslo. 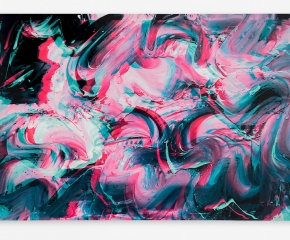 A review of James Hoff: Milking the Flat Cow in The Last Magazine, online.

A review of James Hoff: Milking the Flat Cow in Purple Diary, online.

A video from James Hoff: Milking the Fat Cow, online.

View the video of "Autocorrect" here
Back To Top