A.K. Burns is an interdisciplinary artist who views the body as a contentious domain wherein issues of gender, labor, ecology and sexuality are negotiated. Working to agitate these systems of value, Burns utilizes a broad range of methods including video installation, sculpture, drawing and collaboration.

For her inaugural presentation at Art Basel Miami Beach, Burns premiers a new assemblage of works, entitled Weather Report. The installation calls forth a dystopian domestic scene: a gutted couch, carpet that creeps onto the walls, accumulated marked-up newspapers, and punctured window screens. Burns produces a kind of allegorical scene weathered by the already-here political storm, vexing barriers between the interior and exterior. This installation preserves that which tends not to matter—excess, waste and subordinated bodies. In A Skeleton Reclining (2017), the wooden frame and metal coils of a couch are bared and then protected with a plastic cover. Lit with an under-glow, the couch is propped up on slumped torso-like bags cast of dirt and embedded with Felix Gonzalez-Torres-esque candies. The specter of wasted bodies figures here as weighty and still present.

A series of framed window screens also bear traces of abuse and disrepair. These sculptural wall works are torn and frayed, finished with a metallic powder coat surface. The perforated screens belie the imagined barrier between the wild and domestic spheres. Failing to fulfill their intended function as screens, these breezy, yet barbed mesh sculptures act as metaphorical mechanisms through which socio-environmental elements have aggressively broken through. In dialogue with the screen sculptures is a sequence of letter-shaped rugs cut from earth tone carpet that intersect the booth floor. These rugs read in a circular anagram as O-P-E-N or N-O-P-E depending on the viewer’s perspective. This turn of phrase acts like a linguistic-material shutter, a leaky filter in which access may be denied and barriers breached.

In the serial work Post Times (2017), The New York Times and The New York Post are collaged using wheat paste and colored with paint-waste transferred from Burns’ studio drop-cloths. Burns embedded then extracted thin rebar to leave a rough-cut grid in the thin sheets of newspaper. Within this mise-en-scène, the collages recall the daily ritual of reading the news–not for pleasure, as in the ‘good life’ fantasy, but rather as a compulsion in the face of political crisis. These collected, torn and marked-up newspapers are rendered partially illegible, suggesting a painful attachment to media felt by many politically vulnerable subjects, for whom news is simultaneously vital and violent.

A.K. Burns lives and works in Brooklyn, NY. Recent solo exhibitions include Shabby But Thriving at the New Museum, New York, and Fault Lines at Callicoon Fine Arts, New York, both 2017. Upcoming exhibitions include a series of public sculptures for FRONT International, Cleveland, summer 2018. Currently Burns is at work on Negative Space, a cycle of five video-installations that take speculative fiction as a point of departure. The opening episode, A Smeary Spot (2015) debuted at Participant Inc., New York. It has also been exhibited at the Portland Institute for Contemporary Art, OR, in 2016 and most recently at Human Resources, Los Angeles, in 2017. As of summer 2017 Burns is in development on the third video, commissioned by EMPAC at Rensselaer Polytechnic Institute in Troy, NY. Burns was a 2016-17 Radcliffe Fellow at Harvard University and a recipient of a 2015 Creative Capital Foundation Visual Arts Award. Her work can be found in several public collections including the Museum of Modern Art, NY and the Los Angeles County Museum of Art, CA. 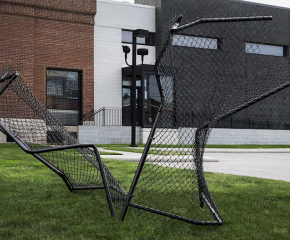 Coverage of the BMW Art Journey Prize shortlist in The Art Newspaper, online and print.

Read the article in artdaily here
Back To Top